Smt. Padmini Ramachandran popularly known as Padmini Priyadarshini is the Director of Natyapriya Institute. She is the disciple of the veteran Guru. Padmashri. Vazhuvoor Ramaiah Pillai. She has been bestowed with the prestigious Karnataka kalatilaka award, Bharat Shiromani Award, Karnataka Rathotsava Award, Best Guru – Music Academy, Chennai. A very famous expert choreographer and a veteran guru in the Vazhuvoor style.

Bhanumati was born in a musically inclined family: Mother: Isaimani L.R.Lakshmi, noted musician & composer: Father: Dr C.S.Balakrishnan: a zealous promoter of the cause of Indian Classical Music. Bhanumati started learning dance at the age of 10, had the Privilege of the tutelage of greats like Padmashri K.N.Dandayuthapani Pillai at Chennai, Padmabhushan Dr.K.Venkatalakshamma, the doyen of Mysore Palace tradition and Padmabhushan Smt. Kalanidhi Narayanan. She has over 2000 programs to her credit both in India & abroad that include participation in all major dance festivals.

She has been honored with many titles for her incredible contribution to Dance: Singarmani, Kalaa Shri – Karnataka Sangeeta Nritya Academy, Aryabhata Award. She has senior Fellowship on Group Choreography – Ministry of HRD, Govt.of India.

Mangala’s Inception as an Artist

She started her training at the age of 7, under the able guidance of the renowned Guru. Bharat Shiromani, Smt. Padmini Ramachandran and accomplished her Rangapravesham with the blessings of the Guru in the year 1995. For the last 15 years she is under the patronage & Guidance of Guru. Singarmani, B. Bhanumati, who is well known for her expertise in Abhinaya.

With a performance career over 23 years, Mangala has several performances to her credit both at prestigious festivals and sabhas in India, USA, and UK. Her Group Choreography has been recognized by critics and presented by esteemed performing theaters.

In true spirit of this rich tradition, Mangala firmly believes in imparting this art form to young aspiring dancers through her dance institute “NRITYA BHARATHI” Carmel, IN. She has a team of young talent and professional artists. 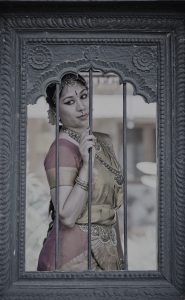 Click Here to Learn more about Mangala – Current in Carmel

Mangala was really in her element while executing the Jathi’s in the faster tempo, what followed thereafter was the piece de resistance a varnam in Abhogi “Vanna Mayile”. Mangala made her presence felt very impactful in the portrayal of Viraha. The mobility of her face is remarkable. She never wilted and her drishti was as disciplined as a seasoned performer.

Mangala’s histrionic expertise was fully on view in the elaboration of the compositions. It was a pleasant experience to see the dancer in great form during execution of graphical representation. The Nritta marked by the neck movements, rechikas and theermanas with some striking poses embellished the concluding Swati Tirunal’s Tillana.

The erstwhile student of Padmini Ramachandran & B. Bhanumati has shown promise in her Rangapravesham itself. Its consolidation was evident in her dignified stance in the Daru” Mate Malayadhwaja” what enhanced her portrayal was her Sprightly Angikas and Abhinaya.